Chess has a lot of crazy rules. (Castling and en passant, anyone?) As a beginner, it may seem hard enough to get all the basics down, but before long, especially if you decide to play in tournaments, you’ll hear someone mention chess clocks. When you do, you’ll probably think to yourself, ‘Isn’t chess all about focus and deep thought? What does time have to do with it?’ Or even more simply, ‘What is a chess clock, anyway?’

Lots of sports and games have time components and chess is no exception. Although friendly chess matches don’t often use clocks, they are required at most chess tournaments.

A chess clock could be more accurately described as two clocks that are designed to run as independent timers. They can be analog or digital – the image on the left below shows a classic analog design; the image on the right is representative of common digital clocks. 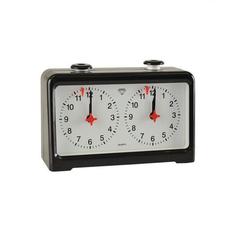 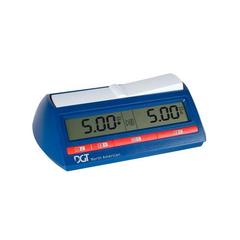 All chess clocks include two buttons, usually along the top of the clock, that simultaneously stop the timer for one opponent and start it for the other. They also include some sort of indicator to let players know when a participant’s time has expired.

How are chess games timed?

There are many different approaches used for timing chess matches. In the US, one of the most common is to simply give each player a certain amount of time in which to make all of their moves. The time required for each move is subtracted from the player’s total allotted time and if all of a player’s time expires before the game is complete, they lose. Other methods involve delays or even additional time added for quick moves.

Tournaments generally require timed matches. The timing approach is outlined for each match using a standard code – the numbers of moves for a given time frame (or ‘G’ to indicate the time is the total allotment for the entire game per player) followed by any incrementing or delay information. For example, G/60, 5d means each player gets an hour total to complete all of their moves and there is a 5-second delay after each player’s turn starts, before time is removed.

What is the best chess clock?

There are almost as many answers to this question as there are chess clocks. In general, the best chess clock is the one with the features you need. Although cool looking and traditional, the classic analog clock is limited in its utility these days. For sheer usefulness, a basic digital clock is the way to go. One of our favorites is the DGT North American. It is reasonably priced, durable, and well-suited for most types of play. Of course, if you need more customization than the DGT North American offers, there are more expensive and versatile options available. And although they aren’t suitable for tournaments, if you’re just looking for a way to time friendly games, there are many online chess clocks and smartphone apps.

A basic, reliable chess clock is something that all intermediate-level players should have. Even for new players, chess clocks can add variety to their games and make it more fun to play against better players, by allowing the better player to be handicapped with shorter time.

Ready to purchase one for yourself or the chess lover in your life? Check out our full collection of chess clocks.